Sometimes you sit on the floor covered in ink and staples. Sometimes you email a file to a copyshop and turn up a week later to carry a box of books too heavy for humans to carry. Sometimes you use Lulu or CreateSpace or Lightning Source or the ship replicators.

Anyway, there are choices to make and conversations to have along the way, and at the end of it, hopefully, are some people reading some books. 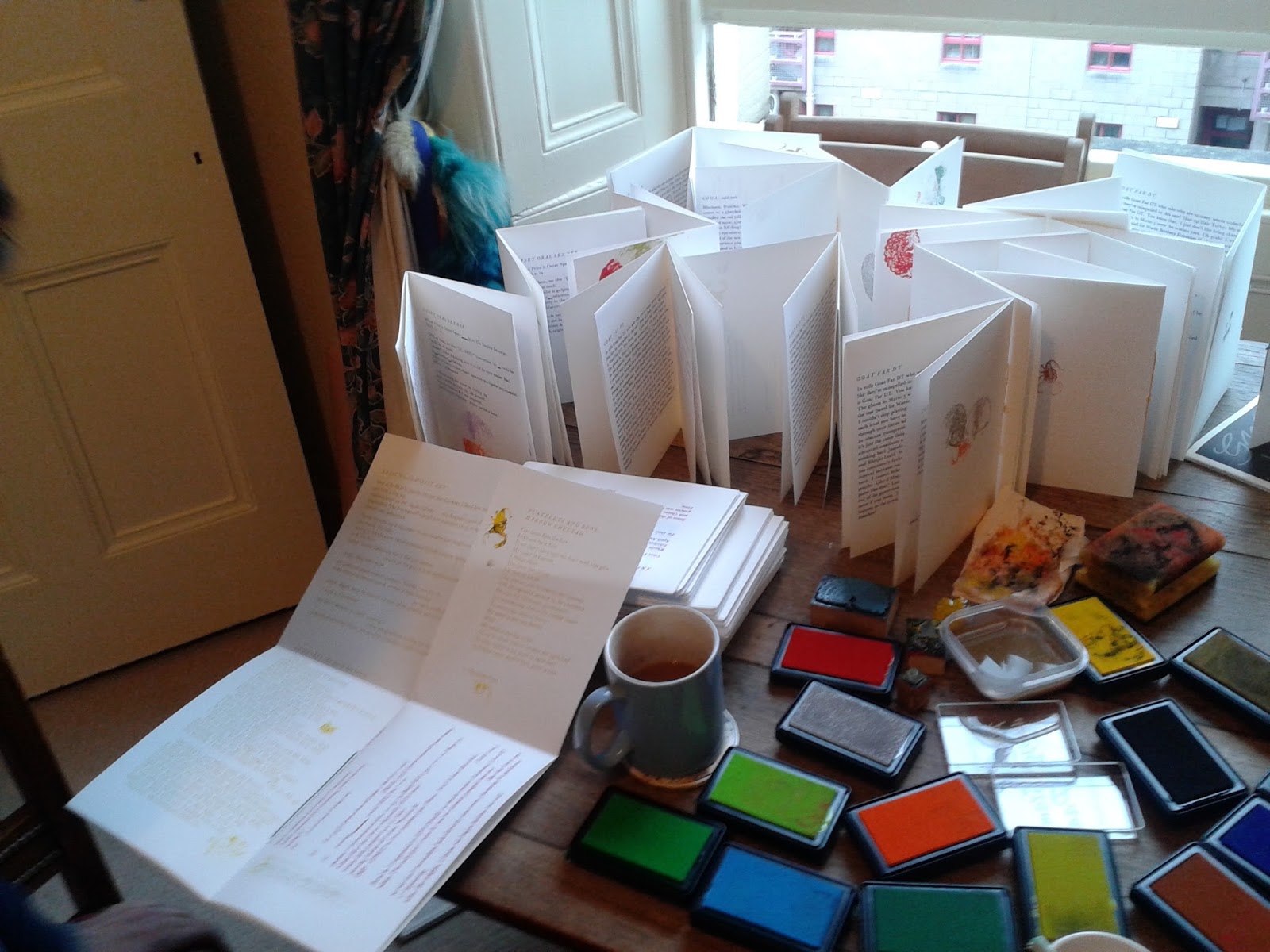 We are still living through an era of experiments into the possibilities of online crowds and the IRL populations attached to them. We have Wikipedia. We have TaskRabbit and we have Tinder (or they have us).

In some respects, the book has been a major locus of such transformative energies. You know the stuff: the rise of the ebook, of print-on-demand, the transformation of vanity and boutique publishing into indie authorship, the spillover of authorship onto online platforms, various ginormous digitisation projects, crowdfunding patronage, a few intriguing examples of automated authorship and/or publication.

But in other respects, books have yet to receive the full "online collaborative production" treatment (see note 1). There is no online tool which breaks down book production, at a very fine grain, into its various stakeholders and their various capacities and rapacious desires.

Maybe things will stay that way, and maybe it's great that they will.

But, as usual, I'm going to imagine what it could be like if things were to change. (Part of what's interesting about this is extrapolating to production more generally. But I'll stick with publishing, for now anyway).

The Future of Publishing (or whatever)

Now you're on the Project Page, where you are invited to participate: as an author, a chief editor, a slushpile reader, a fan, a designer, a typesetter, a copyeditor, a proofreader, a reviewer, a printer, a publicist, a reader, as something else, as several or all of the above. You also have capacity to invite people in your networks onto the project, in a particular capacity if you like.

Maybe some of these options are greyed out. For simplicity, let's say the project is a short story anthology, and you're invited to contribute either as a reader or as an author.

Selecting these options opens an array of other options. If you come in as a reader, you can pledge money, and in return of course you'll get your copy or copies (and perhaps you'll get your Unbound/Kickstarter-style prizes: a signed limited edition, a few pages of the handwritten MS, a freshly-worn item of authorial garb, etc.).

But now it gets interesting. Designers and coaxers have been crafty, so you also get a say in what the book might contain, its format and appearance, its production timescale, etc. I picture there being slider bars: you don't pledge an amount, you pledge a spread.

If you like, you tick a bunch of "nice to have" boxes, and perhaps arrange them in some kind of order of priority. If production goes ahead in a way which conforms closely to your preferences, you'll pay near the top of the spread. If it wasn't quite what you're looking for, you'll pay the cheaper price. That part of the display might be a bit like this: 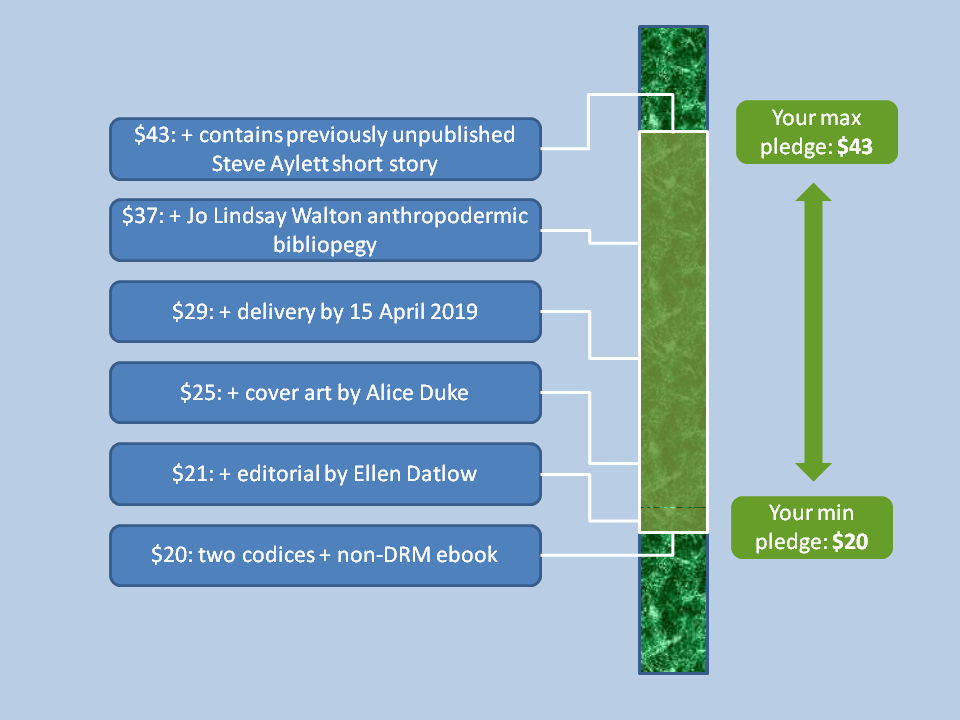 . . . only different. Everything is accompanied by fruitful bloopy noises, making quantifying and tinkering your consumer preferences, whilst sporting the mingled air of financier, impresario and artistic genius, entirely irresistible.

An "advanced" tab allows you to create preference dependency trees and weight and interrelate your preferences in complex ways. The realm of professional and quasi-professional intermediaries and their bots, perhaps, looking for a way to scoop a few cents out of the process.

In the "advanced" tab you're also exercising your discretion over the project as a whole. Perhaps it is important to you not merely that you get a particular object in the post, but that said object makes a bid for a particular cultural standing: in other words, it's important to you that a certain print run is established, that certain distribution channels are used, and so on. You don't want a book nobody else has read.

What about prospective authors? There's a similar glittering control panel awaiting them. The key dynamic to be captured here is risk (see note 2) and return. What texts and what rights to them are you offering? What value are you placing on editorial feedback, or on receiving reviews or scholarly commentary, or having your work illustrated or responded to in some other way? How many copies of your text do you want to be out there in the world? What royalties are you looking for? Are you willing to support the project financially, or do you perhaps expect upfront financial compensation? Set your sliders and pray for the best!

Obviously, any stakeholder can originate a project: it might be a prospective reader who has a very OTM hankering. Quasi-divine editors and authors may vie to realise the vision implicit in that prospective reader's pang. The site constantly analyses the pledges and preferences of the various stakeholders, trying to figure out a form in which the project can go ahead.

Any function can also subsidise or tax any other function. For instance, as an author, using a bolt-on third party app, your Goodreads tastes could be reflected in the kinds of bids you offer: you automatically reduce the royalties / advances you require, or increase the backing you offer, whenever you might appear alongside your literary heroes. Or you may be willing to sign up to write a certain something on the proviso that a specific person signs up to read it. Or your willingness to write a review may give you a free book and/or influence in the project, unlocking funding streams from other stakeholders' author and editor tabs.

Perhaps the editorial function, rather than accepting or rejecting submissions outright, involves -- that's right -- another slider. You, obscure author, have submitted your terrible story to this high-profile anthology of luminaries, all of them writing at the top of their game. It's not that you've been rejected exactly. It's just that, well, you'd need to be supporting the project to the tune of $20,000 before the effect of your terrible writing and your vague face can be balanced out.

There arise some interesting questions about transparency. Are such editorial rankings public? Are author financial contributions public?

(2) Let's take this a little further. In trying to fit a project to a variety of preferences, there's an issue about how bespoke these books should be able to be. A funding threshold may be reached more quickly if multiple versions are produced: reader bloc A wants cover A, reader bloc B wants cover B, so why not make both? If you want to print an anthology of the year's best genre fiction, why not give every reader an anthology of their personal favourite genre authors? Where do we draw the line between a book which exists in several different versions, and a whole range of diverse objects that are grouped together primarily by the finance which underpins them?

There are centripetal and centrifugal forces, and these will partly be expressed in the positions taken by various stakeholders. For instance, an author may set a minimum print run thresholds. They may not be satisfied to have their work dribble out in two copies here, three copies there. A critic or a reviewer also needs a copy of a book which is materially similar to somebody else's copy. So does a fan, in fact! Perhaps the fan stakeholder is partly distinguished from the reader stakeholder insofar as the fan wants a social experience: it's important to the fan that these books don't get too bespoke.

Perhaps there's even an overall slider for project homogeneity per se, that is, a slider for acceptable levels of diffusion from Platonic essence to family resemblance. Interesting questions arise for librarians.

But then again ... we're getting used to the highly bespoke -- or at least highly individuated -- interlaced palimpsests of Twitter and Facebook. Maybe it's enough that we read the same authors, or feeds, or brands, to satisfy the desire to feel part of something larger. Maybe we don't need to also read the same books, or to back the same projects.

So maybe the idea of the "project" can go out the window. And what can come in the window is an Amazon drone bearing an "anthology," in a codex print run of two, that contains two stories by two authors you like, plus another story by an author your neighbour likes (your neighbour just got the other half of the print run), plus another story by a self-appointed (and self-funded) up-and-coming author convinced they're about to hook you, plus a whole bunch of spam and marketing and advertising and stuff, some of it disguised as other stories.

Of course, you are more discerning. You require an originator, a custodian. You would never give your attention, let alone your financial support, to that kind of cheap algorithmic palimpsest, whose entire existence is owed to its mariginal economic feasibility, whose totality has never been sanctioned by human eyes, hands, hearts.

Don't worry, there's a slider for you too.

Note 1: In some ways, "collaborative" is a misnomer, because it carries implications of getting to know your collaborators, working through differences together, persuading your collaborators or allowing yourself to be persuaded, reaching compromises or transcending problems, building solidarity, trust and respect, etc. The kinds of online environments I'm thinking of typically try to minimise this kind of collaboration; they let people collectively contribute to a project without collaborating in the sense just described. They are liberalisations more than democratizations. They develop a particular kind of rule of law which helps to orient liberalised behaviour towards a particular task, architecturally imposing a particular kind of wisdom on the flow of the crowd. They have a close relationship with gamification. Often numerical reputation / experience rankings substitute for more intuitive, informal patterns of trust and obligation. The system outlined above certain implies this Top Trumps reductivism. While the deck of authors, critics, reviewers, editors etc. must of course evolve automatically, I nominate myself to establish the seed values.

Note 3: Alternative. There could be a fancier incentive structure, involving reversing the weighting once all investments have been recouped: say, 50% / 75% / 125% / 150% (multiplied of course by the amount you've pledged). So platinum investors recoup their investment more quickly but make less the project proves long-term profitable. Bronze investors risk losing everything, but start to make more serious money once everyone has been paid off. (Under such a system the tiers should probably be labeled differently: bronze just doesn't do justice to the kind of sexy book gambler you are).
Posted by Jo Lindsay Walton at 8:28 AM