Interzone 248 is out, including my review of Fearsome Journeys: The New Solaris Book of Fantasy, ed. Jonathan Strahan, plus a friendly and interesting review of Invocation -- a fantasy book I wrote, 11.5% of the print run of which I now always wear in this specially 3D-printed diadem-cum-rack -- by Peter Loftus. The issue also includes fiction by Carole Johnstone, James Van Pelt, Greg Kurzawail, Ken Altabef, Sean McMullen; John Howard interviewing Christopher Priest; Jonathan McCalmont's Future Interrupted column; David Langford's news and tidbits; and loads of book, film and DVD/Blu Ray reviews.


"In times of social uncertainty and psychological hazard readers need new ideas, new ways of making sense of their world. There’s an appetite for prophecy and truthful exploration of the mess we’re making, politically, ecologically and economically."

An early review of the issue by Lois Tilton.

Phonebloks: modular phones that snap together as easily as Lego. You could have really big "phones," right? Phones that weren't really phones? Looks like some sort of nebulous new computing revolution waiting to happen. It's mostly just a concept right now: they want a day of crowdsourced clamor at the end of October. Whose side are you on? The future's side? Is that it?

It would be misleading to call this story "dystopian"  or "chilling plausible," it's just straight plausible, really. But it does make me want to come up with a utopian B-side. (Spoilers, sort of). Is the bad stuff the story depicts -- the obvious one being untrained, dispirited, gratuitously sad and lonely and knackered retail staff travelling illegally to work to give bad customer service, nick stuff and snitch on each other -- is that inevitable within its basic, you know, techno-social set-up? Or is some of it down to bad gamification? In what ways has this retail sector been mis-gamified, under-gamified? See also: ten tales of gamification.

Bruce Sterling notes the arrest of a school pupil who uploaded his virtual massacre to YouTube. "Augmented Reality: American teenager arrested for using augmented gun app" (Wired). See how the ad implies that this augmented reality game is so addictive, even when you become a real soldier in a real firefight you're still just gonna wanna keep playing! 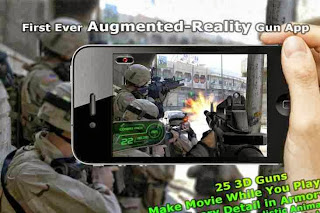 Is the solution here that law enforcement officers get some app of their own, so they only need to arrest the kid in augmented reality, which in underlying reality corresponds to this completely prudent but completely sensitive and discreet tête-à-tête? Hmm. Some action structures may have no corresponding game structures; they would be ungamifiable. More on that later, maybe.

Gamified, hypothecated tax. Imagine tax worked a bit like the Strange Horizons fund drive. Citizens and companies pay as much tax as they like (or in another scenario, must pay a certain level, but distribute it how they like) into various funds. Get to this level to build a new hospital ward, get to this level to equip it for dialysis, etc. One interesting aspect of this set-up is the potential for a kind of out-in-the-open corruption. If the top is tier is something everyone desperately wants, they give tacit consent to the intermediary tiers. "If we raise $100,000,000, mayor gets a sweet ass yacht and a maybe bunch of them Hexes. If we raise $200,000,000, we'll keep the ambulances on the roads and a bunch more Hexes."

Disney threatens to make your fingertips into little speakers (BBC).

Tommy Edison, blind since birth, has a go at explaining his perceptions of "things that sighted people see all the time" (YouTube).

New study on the cost of using cash.

Britain's 50 new radicals (mostly companies and other organisations): a list by Nesta.

Earth's selfie. "Our pick of the best space-related imagery includes the birth of a star that will one day be 100 times the mass of the sun, lava flows from the largest volcano in the solar system, a picture of Earth from 1.44bn kilometres away and plans for the next Mars rover" (The Guardian).

Chris Lough ponders Red Dead Redemption and whether people who have grown up as gamers have a different sense of what counts as legitimate narrative. "To see others protesting this ending left me wondering—very much in a thinking-out-loud way—if the very concept of narrative, or cause and effect, is simply broken in maturing gamers who have spent their lives absorbing narrative as it is constructed through games." Does the End of Red Dead Redemption Underscore How Fractured Game Narratives Are? (Tor.com)

Monica Valentinelli expresses her number one wish for the SF&F community, which happens to be a mentorship program. "To varying degrees, I feel what’s happening today in the science fiction and fantasy genre is the same thing that has happened before. [...] It’s 'You haven’t been around long enough to understand how changes are implemented' versus 'You’ve been around so long you aren’t willing to change.'"

Joseph Tomaras looks at genre as a function of market segmentation of the ontologies of fiction. "The ontologies of fantasy cluster around the thesis that 'all things that can be imagined are possible.' This is quite distinct from the thesis of horror ontologies, for which things are not as potentialities but as actualities, independent of their being known or even imagined."

Bodhisattva Chattopadhyay on Anglocentrism. "These planetary imaginings are set at the dawn of European colonialism. Is it such a coincidence? Note that Clute’s insistence on the Western view systematically evades any narrative history which may highlight the role of colonial imagination in the origins of the fantastic, in spite of the fact that science fiction and fantasy critics have, before him, often noticed the close ways in which the representations of the colonized Other informs and influences the development of science fiction themes and tropes—that science fiction is a genre of systematic Othering in the Anglo-American world." Recentering Science Fiction and the Fantastic: What would a non-Anglocentric understanding of science fiction and fantasy look like? (Strange Horizons).

"[...] the world view that underpins hard sf conforms structurally to the world view that underpins right wing ideologies. It is a narrowly prescribed world where obedience to the laws is essential for survival, far outweighing in importance the individual needs and desires of any of the inhabitants of that world. It tends to be conservative: if the law of nature is a universal limitation on any action, revolution or even gradual change must be resisted. And it is a set-up in which great men are fated to emerge as leaders because they know best, and the masses should bend to their will for the good of all." A reprint of "Hard Right" by Paul Kincaid, his follow-up post, and another post on Tom Godwin's "The Cold Equations."

Ian Sales has a hard think about hard science fiction, authoritarianism, and whether that classic example of the hardness of Golden Age science fiction, "The Cold Equations," really counts as hard science fiction. "Hard sf generally [...] presents dilemmas predicated on fixed natural limits, and then finds solutions using human ingenuity [...] Certainly a lot of hard sf is right-wing, especially the near-future variant. But that’s a characteristic brought to it by the writers, not something innate to the subgenre."

One quick suggestion: perhaps it's not that hard science fiction is inherently right wing, but that right wing politics are an example of hard science fiction? The slippage between conformity with nature and conformity with society is nowhere more pronounced than in right wing mythology. The obvious example is the conviction that markets arise spontaneously from human nature, like anchovies from sea foam in Athenaeus's account, or bookworms from codices blown with certain southerly or westerly winds according to Vitruvius's view. Insofar as the peculiar compound of economic laissez faire and social conservativism is hard science fiction, it is hard science fiction which fits pretty well with Kincaid's analysis -- but as an example of the subgenre, not as its model or its teleology. (I'm not sure I really mean this. Anchovies? Teleology?)

Another quick thought: where is the reader in all this? Star Trek seemed like pretty hard science fiction to me, till I got my PhD in Oscillating Variable Quantum Neutrino Inversions. Do different levels of readerly expertise matter? Do they matter in different ways in the 1950s and in the 2010s, when readers can connect online form a provisional public, sharing expertise, contending and assessing the rigour of a story?